Showing posts from April, 2018
Show all

By Michael Redlich - April 03, 2018
The Eclipse Foundation recently launched at survey for developers to choose the new Jakarta EE logo.  There are seven finalists and you get to choose your top three. Time is running out as the survey closes on Friday, April 6 at 12 noon EDT . Eclipse also announced a brand new Twitter account, @JakartaEE . These are indeed very exciting times in the Java world!
Post a Comment
Read more 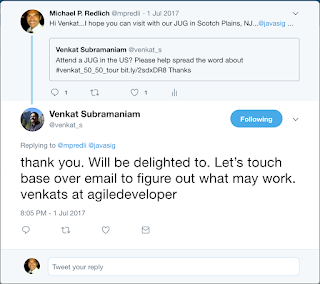 The ACGNJ Java Users Group (facilitated by yours truly ) and the NYJavaSIG (facilitated by Frank Greco ) recently hosted Venkat Subramaniam to speak at our respective groups on back-to-back nights. On March 19, 2018, Venkat visited the ACGNJ Java Users Group at Drew University in Madison, New Jersey where he presented " Twelve Way to Make Code Suck Less ." He discussed why we should care about code quality and defined the First Law of Programming which states, "Lowering quality lengthens development time." Venkat then introduced and discussed his 12 principles to improving code quality along with plenty of live-coded examples. On March 20,  2018, Venkat visited the NYJavaSIG at Credit Suisse in New York City where he presented " From Functional to Reactive Programming ." He discussed the differences between imperative vs. declarative styles, normal functions vs. higher-order functions, and functional to reactive programming along with plenty
Post a Comment
Read more
More posts